Hi all,
I have a few questions regarding the determination of ΔG for the α-to-γ transformation with the NPLE model. Here are the questions. Say I have Fe, C and Mn:

(1) I assume that ΔG is calculated by χ(C_γ-C*_γ) in MICRESS with TQ where C_γ is the local composition, C*_γ is the "equilibrium C content in γ", and x is a factor calculated through TQ coupling (fitting ΔG vs C_γ). Is this still true for NPLE with TQ?
(2) I am trying to illustrate ΔG on a free energy vs C concentration diagram (or a ternary diagram if possible), and I started to confuse myself.
Because of the extra constraints on μ_C, μ_Mn and μ_Fe, I don't think the "parallel tangent method"* can still be used. In the case of paraequilibrium, it is possible to find the points of C contents which give μ_C,α=μ_C,γ and draw two tangent lines. Their y-intercepts when C=0 gives ΔG (see attached**). I wonder if this is still valid for NPLE even with μ_Mn,α=μ_Mn,γ and μ_Fe,α=μ_Fe,γ.

* For example, as in "Multi-ternary extrapolation scheme for efficient coupling of thermodynamic data to a multi-phase-field model" Fig. 1.
** Free energy curves were taken from B. Zhu's thesis, where "SC" denotes all substitutional elements with no C.

Btw, I am wrapping up my research work and thesis. I'd like to thank everyone here who has helped me on MICRESS and phase-field models, especially Bernd and Ralph! 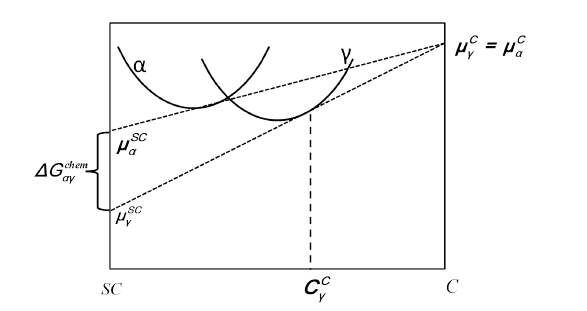 Nice to hear that you are about to bring your thesis to a good end.

Indeed, when considering multicomponent systems it is very confusing to use this type of diagram, because it is (without further assumptions) only valid for binary systems. I agree that, as you say in (1), ΔG is calculated proportional to the deviation of the carbon concentration from the equilibrium concentration e.g. in the γ-phase. Then, χ is the derivative of ΔG to C_γ, and is numerically calculated using TQ. However, you need to add ΔG0, which corresponds to the quasi-equilibrium driving force:

In the binary case, and taking into account that C is interstitial, ΔG0 should be 0. At this point, the fundamental assumption of having a constant number of moles in each cell, having equal molar volumes of both phases and thus the phase-field parameter describing the molar fraction of each phase, which is also used in MICRESS, must fail: ΔG0 is calculated with fixed phase-field parameter (=molar fraction) and thus not equal to zero. Thus, the calculation of the driving force is not correct (although it will still converge to the correct local equilibrium if the front is allowed to move).

Considering paraequilibrium or NPLE means having at least a ternary system with a second substitutional element (Mn). In the paraequilibrium case, the tie-line still is parallel to the x(C)-T plane, so that the Gibbs energy diagram which you showed can be "rescued" in the shown way. Especially, no derivatives of the Gibbs energy curves in Mn-direction need to be calculated, so that ΔG0 still should be 0. Or said in another way: Fe and Mn can be substituted by SC without losing information.
For NPLE, however - and that is probably what you mean - the tie-line is not parallel to the x(C)-T, even if the compositions are fixed to that like in case of paraequilibrium. But there is a contribution of Mn to the driving force, so that ΔG0 is not 0. The tangent planes which need to be constructed have a slope in Mn direction, and cannot longer be drawn in a pseudo-binary way.

We can also try to put everything in another way, which may make it perhaps clearer. In my view, there are three issues which can be considered separately:

1.) Can the parallel tangent method be used for interstitial elements? --> no! This leads to an error in the driving force, although the system still behaves similarly and (for binary systems) converges to the same local equilibrium. In ternary or higher order systems, the problem is furthermore, that "normal" diffusion (with Fe compensating the C flux) leads to accumulation and trapping of Mn at the γ-α interface.
This problem cannot be solved in phase-field models without considering volume effects. This is done in a simplified way in our new volume model which also allows for interstitial diffusion.
2.) Is the parallel tangent method valid for NPLE or paraequilibrium? -->yes, although these models typically imply the presence of an interstitial elements, turning the answer to no. However, paraequilibrium or NPLE without interstitial elements would theoretically be possible, if there are fast-diffusing substitutionals...
3.) Can the Gibbs energy diagram which you showed be used for multicomponent systems? -->no, with the only exception of paraequilibrium, which essentially allows for replacing all substitutional elements with a single pseudo-component.

Hi Bernd,
Thanks for your reply. Just a few follow-up questions:
(1) Just to confirm, the total "local" driving force is the sum of quasi-equilibrium driving force and (or generalized to a system with n components, ).

For NPLE, do we need to incorporate Mn in the summation term>

(2) How is the quasi-equilibrium driving force determined? Is it based on local phase composition and solute composition? Is there a reference point?
(3) Since is the partial derivative of "" with respect to c, is this "" the total driving force, or just the free energy difference between the two phases under a certain construction (e.g. determined by the parallel tangent)?

Thanks in advance! I hope the questions make sense. I am asking because I would like to describe the determination of driving force by TQ coupling in a bit more details, which hasn't been described in previous thesis with MICRESS involved in my department.

let me answer point by point:

1) I confirm your formulation. For NPLE Mn must also be included, because NPLE implies local equilibrium.

2.) ΔG0 is determined by the parallel tangent construction. Numerically it is calculated in TQ as a dormant equilibrium with one phase with phase fraction np(α)=1 and the other phase with np(β)=0. Generally it is a function of the phase fractions, the mixture compositions and temperature. The compositions of phase α and β are obtained iteratively with using the mass balance c=Φαcα+Φβcβ.

Thanks Bernd! Apparently I was confused by the notations of these terms. Billy
Top
Post Reply
5 posts • Page 1 of 1