I found MICRESS has a model for NPLE. But there is no document detailing it. The only literature is "J Rudnizki et al. phase-field modeling of austenite formation from a ferrite plus pearlite microstructure during annealing of cold-rolled dual-phase steel. Metal Mater Trans. 2011".

Could you please give some details.
I have the general idea of NPLE. But for a limited mobility, how is the driving force calculated and how does partitioning of elements occurs between phases, e.g. in austenite-to-ferrite transformation in Fe-C-Mn alloy?
Thank you.

For MICRESS, the problem consists in the different length-scales involved with the slow and fast-diffusing elements. As only the fast elements are limiting the transformation speed, those mainly contribute to microstructure formation. Therefore, typically, microstructure simulation will be done on the scale of their diffusion length.
This means that in a typical MICRESS simulation the pile-up of the slow elements cannot be resolved. Without the special NPLE model, although local (quasi-) equilibrium is fulfilled, the driving force is not evaluated correctly - only the innermost grid cell of the interface with a very small fraction of the vanishing phase would feel the correct compostion and thus driving-force.

The strategy which is followed in MICRESS is:

This is all! You can observe the different mode of redistribution by checking the corresponding phase composition outputs (*.cXXphaY).

The redistribution behaviour (nple, para, normal) can be specified for each element independently and should be set to "nple" for all slow-diffusing elements and to "normal" for the fast elements.

Hi Bernd,
I have one question that with an extremely high mobility, the solute concentrations will approach to the equilibrium which are C1 and C2 in the attached figure. But the carbon concentration near the interface edge should be C3 which is a little bit different from C2 in terms of the Carbon concentration.

By the way, I cannot find the example file ‘Gamma_Alpha_NPLE_in.txt" on the website. 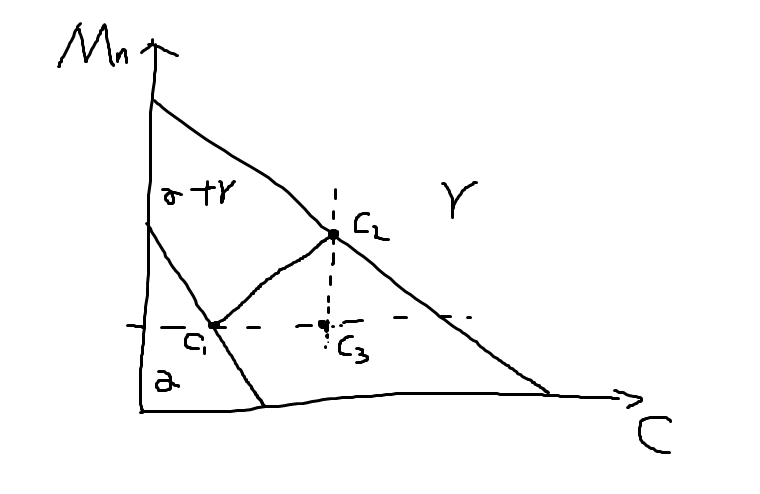 I do not understand what is the meaning of C3 and how you construct it - why should it have another Carbon composition than C2?

The examples on the webpage have not been uddated yet. But the actual examples are on the installation CD - I can send it to you if you wish!

It would be quite appreciated if you could send me the example (zhubenqiang@gmail.com).
The line between C2 and C3 is isoactivity line for carbon.
You can see the schematic of LENP below. 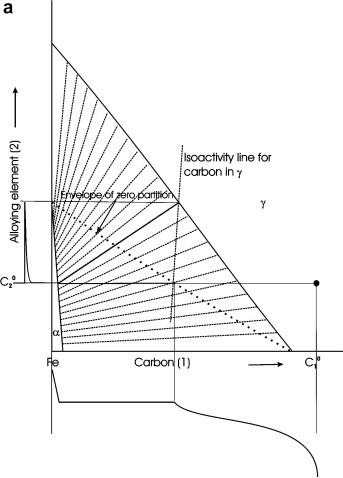 I do not see why the composition at the interface should be different from C2! NPLE implies local equilibrium which is defined by the tie-line!

Madeleine Durand-Charre shows this in her book "Microstructure of Steel and Cast Irons" on page 188: 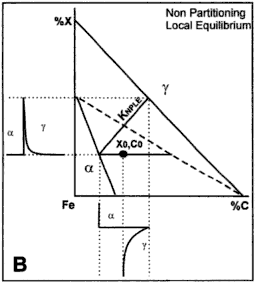 Or do I understand something wrong?