Many thanks for your kind checking my simulation files. I will follow the instructions.

Dear Bernd,
I tried simulations and I still did not get what I wanted. By following your instruction of importing the korn and concentration files, I am able to create a BCC grains with supersaturated carbon to mimic martensite. The carbon concentration in the martensite, however, homogenizes immediately to the equilibrium carbon concentration of ferrite when the simulation starts, time 0 to time 0.002s. Is there anyway to stabilize the carbon in the introduced martensite untill it transforms into austenite? Do I have to, and is there a way, to introduce a separate BCC phases for the martensite? Below are the snapshots of the phase and korn output. The upper one is carbon map and the purple grains are martensite. The below map is the korn map. Please note that the top image is for time 0.002s and the bottom is for time 0s. I did not know how to schedule the showing sequence of the attached images.

Many thanks and kind regards,
Jun 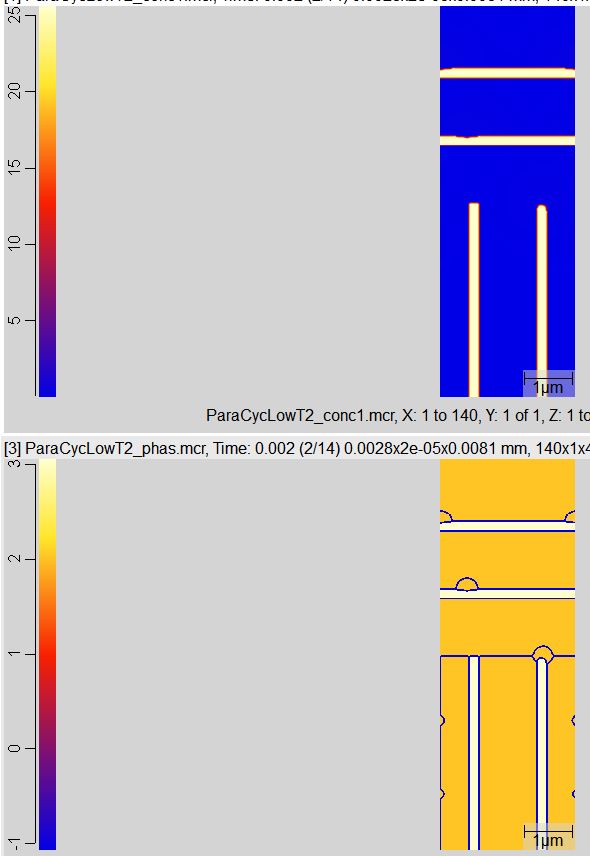 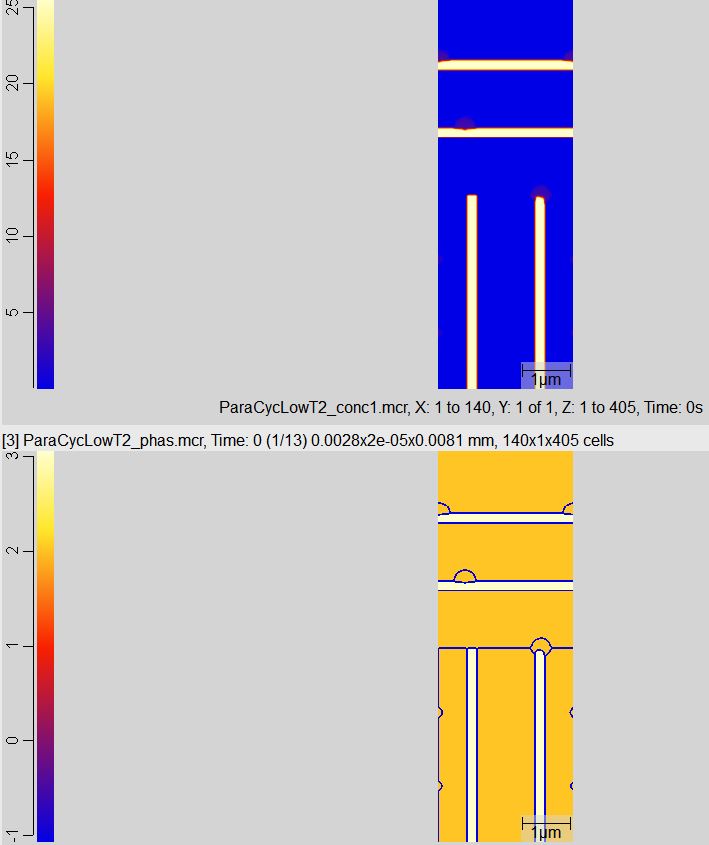 I mentioned this problem earlier above, that, after you switch an old phase to a new phase, it will retain form and composition of the old phase, but later on behave like the new phase. And martensite is not a real phase but may be rather considered as a bcc phase with somehow altered properties.

In your driving file, you use a thermodynamic database for getting diffusion data, but linearized phase diagrams for the phase interactions (by the way, why?). If you would need a separate description of martensite besides bcc you could do that by just adding a further phase in MICRESS, copy the linearized phase diagram description of fcc/bcc to that of fcc/martensite (assuming same behavior), and link the new phase also to the bcc phase of the database. The phase interaction between bcc and martensite would be "no_phase_interaction", because this reaction should not appear. However, you need to do this only if you want to have bcc AND martensite in the same simulation.

The question now is, what is the difference between the properties of bcc and martensite, and how can you introduce that into the driving file?

1.) Thermodynamic data:
If you use a linearized phase diagram, you are free to do what ever you want. The question is just to know what to do. It may be reasonable to stick to the properties of bcc and only introduce a shift in driving force (corresponding to an offset of the Gibbs free energy). In the linearized phase diagram this would be just a shift of the reference temperature. It would result in a changed partitioning behavior and also in a shifted driving force for formation or dissolution of martensite.
When using coupling to thermodynamic databases, the same shift can be accomplished by defining a driving force offset in the dG options of the phase interaction data input. However, this option is available only in the new Version 6.3 of MICRESS.

2.) Diffusion data:
One possibility is simply to define diffusion data for martensite manually . Again, the problem is to know diffusion coefficients as function of temperature, perhaps including also off-diagonal terms. More convenient is to take the same as for bcc and instead use a constant prefactor which reduces the diffusivity and which you can perhaps estimate referring to experimental knowledge. This prefactor can be applied in terse mode of diffusion coefficient input in an extra line with the keyword "factor", e.g.
...
2 1 multi gg
2 1 factor 0.1
2 2 multi gg
2 2 factor 0.05
...
The option is available in MICRESS 6.3 for both cases, manual or database input of diffusion data.

Thus, "stabilization" of the supersaturated bcc can either be done by a driving force offset which shifts to the equilibrium compositions as they were at a higher temperature, and/or by reduction of diffusion coefficients.

Dear Bernd,
Many thanks for the quick reply. I will update the Micress to 6.3 and test what you suggested.
I used linearized phase diagram because I want to used apply the a Para-equilibrium condition, since I consider no Mn redistribution during the fast heating. For doing so, I firstly got a quasi-binary Fe-C diagram and further apply a para-equilibrium restriction. The linearization was subsequently done. Can my driving file cause any problems/errors? Is it wrong to do so?

up to now I did not focus on that. But it appears you tried to put Mn such that it does not have any influence. But be careful, doing it like you did may have an uncontrolled effect on the driving force of the phase transformations.
In my opinion it makes sense either to use the pseudo-binary Fe-C diagram and restrict the simulation to Fe-C, or to use TQ-coupling and para-equilibrium (like in the example Gamma_Alpha_PARATQ_dri) for the system Fe-C-Mn. Any mixture of both is probably inconsistent...